I wasted many years going to see urologists and getting treated like a hypochondriac but I started to get taken a lot more seriously after I saw a pain specialist. 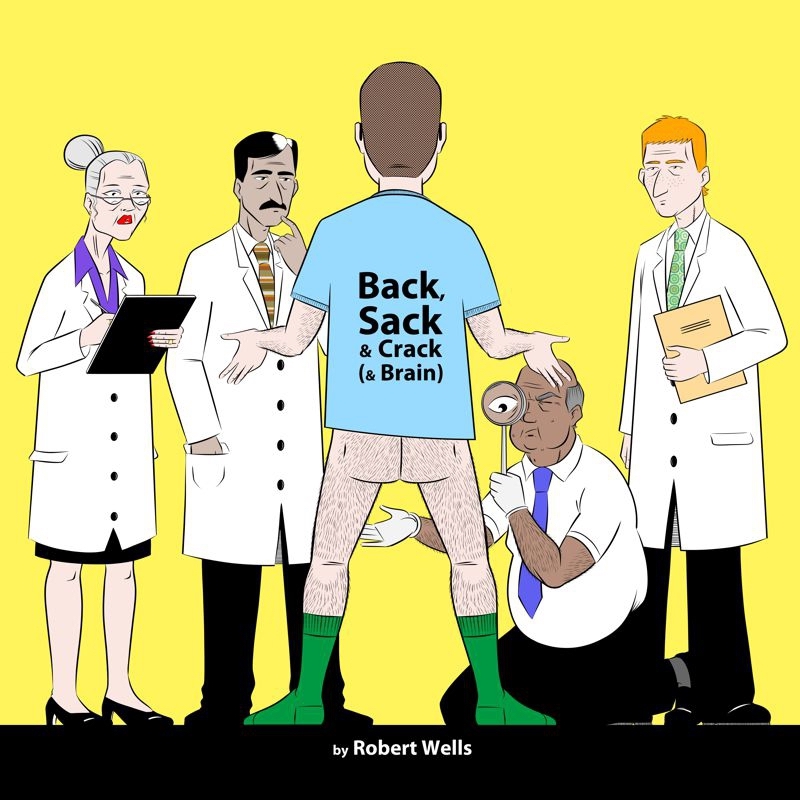 Robert Wells is the author of ‘Back, Sack and Crack (and Brain)‘. A brilliant graphic novel about his personal and nightmarish experience of pelvic pain and IBS. Robert walks us through his dealings with health professionals. From diagnosis to misdiagnoses. And procedures to examinations to name a few. If you haven’t read Roberts book it is well worth the time (perhaps a cheeky stocking filler for Christmas?!) I was moved to tears of laughter and then to tears of frustration and disbelief. Sadly, Roberts story is echoed so often in the patients I treat. 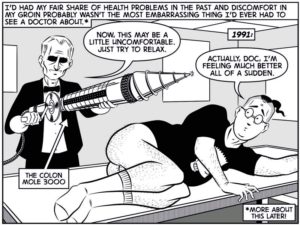 Your pelvic pain – what causes flare-ups if any, how do you manage things now if needs be?

Thankfully, I don’t seem to get that many flare-ups these days. I’m not sure why I don’t get them much now and I’m afraid I’m still not sure what causes them when I do get them. Having said that, I do still avoid a lot of things that I know make me uncomfortable, like sitting on a bicycle seat, swimming, running, etc., so when I do get a flare up it’s usually out of the blue and for no obvious reason. To some degree, I think I’m also used to it now, so mild discomfort that might have worried me if I had never experienced it before is now just an everyday thing and I only really notice it when I am unusually uncomfortable. As these flare ups don’t tend to last long now I usually just try to ignore them and carry on as usual. I only really worry if the discomfort carries on for more than a few days. I still find hot baths help a lot but that’s usually just temporary relief if things are unusually bad.

What was the general reaction to your graphic novel Back, Sack & Crack (& Brain)?

There hasn’t really been much of a reaction to my book at all. Although I was interviewed in the Guardian just before it came out, things went very quiet after that and I’m only aware of a handful of reviews. Most comic shops – even ones that stock other ‘graphic medicine’ titles – have either ignored it or not paid much attention to it, possibly because it’s not published by a publisher that usually publishes graphic novels. Most people who read it find it funny – which is what I hoped for – but getting people to read it in the first place has been hard work and I’ve had to give a lot of copies away for free to get some decent feedback. Luckily, a couple of big-name comic artists that I gave copies to liked it a lot and have plugged it. It seems to be out in the US now, which took a while, but I’m not sure how well it’s done over there yet. 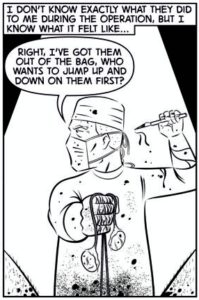 What psychological impact did pelvic pain have on your overall health and wellbeing?

It had a huge impact on my mental health. I pretty much stopped going out and cut myself from a lot of people for quite a few years. It wasn’t just because I didn’t feel well when I was out, it was because it was embarrassing to talk about – not least because I didn’t have a term to describe what was wrong with me and could only describe symptoms – and because I felt like no one believed me. It’s hard for me to believe quite how much it changed my behaviour now.

My wife and I have been together for 25 years, so thankfully I was already in a relationship when all this started and she’s always been very patient / understanding about it. I think it would have made it very difficult for me to meet someone if I had been single back when I was at my worst and very difficult for me to bring up even if I had managed to meet someone.

When I was at my worst, I lost touch with nearly all of my friends, partly because I wasn’t really going out at all anymore but also because I had some friends I couldn’t talk to about it at all. It stopped me being able to work for some time, too.

What do you feel the medical world needs to do to address male pelvic pain successfully?

Not too sure about this one. It would be nice if it was talked about more, or if it was acceptable to talk about it in the same way that it is acceptable to talk about women’s health problems. When I tried to talk about it in the past, I was sometimes greeted with looks of horror – by men and women – even when I was talking about something that required an operation. A lot of people say that men don’t talk about their health problems enough, and that probably is the case for many men, but I also felt like nobody wanted to hear about men’s health problems. I should point out that the period when I was at my worst was the late-‘90s / early-2000s, so things may be a lot better now. 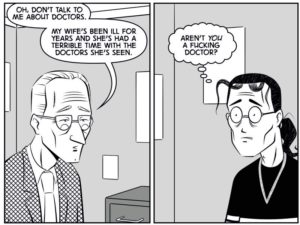 Do you have any take homes for patients/health care providers

I would recommend that patients who aren’t getting anywhere with urologists try to get referred to a chronic pain clinic. I wasted many years going to see urologists and getting treated like a hypochondriac but I started to get taken a lot more seriously after I saw a pain specialist.

Thanks Robert for sharing your hilarious and despairing journey. Greater awareness of the types of barriers Robert had to endure is essential in providing better healthcare in the future for these patients.

Robert Wells, author of ‘Back, Sack and Crack (and Brain)’ and sufferer of pelvic pain

Tim Parks, author of “Teach us to sit still’ and pelvic pain sufferer

Bert Messelink, vice chairman of the European association of urology